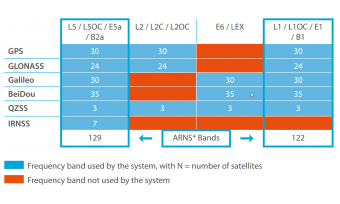 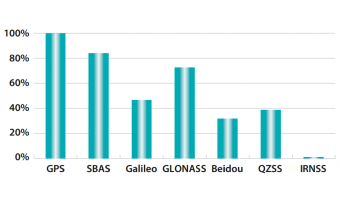 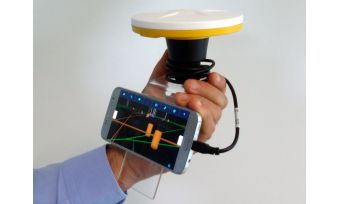 GNSS has now been operational in the surveying industry, and especially in hydrography, for more than 25 years. Whereas the first receivers such as the Sercel NR103 (once the workhorse of the industry) boasted 10 parallel GPS L1 channels, current receiver technology has evolved to multi-GNSS, multi-channel and multi-frequency solutions. This article looks at the current state of affairs and tries to identify the areas where development can be expected in the years to come.

In hydrography, we can distinguish between ‘land use’ and ‘marine use’ of our GNSS receivers. Especially in the dredging, nearshore and inshore domains both land survey as well as maritime receivers are employed. They do not differ in their basic capabilities such as positioning accuracy of number of channels (and GNSS) they can receive. The main differences lie in the form factor of the receiver (portable for land survey, rack mounted for marine survey) and the method of operation. Whereas a land survey receiver is almost always combined with a separate controller running extensive data acquisition software, the marine receiver is more and more of the black box type with at most a minimal display (and sometimes none). Setting of the pure marine receiver is done using a network interface with the computer browser whereas the positioning data is transported over the network (or if required RS232) connections to the data acquisition software.

If we look at the major developments over the last few years, then it is the continuous addition of systems to the satellite constellation such as Beidou and Galileo as well as the longer existing GPS and Galileo. But even within the existing systems developments are ongoing, with new frequencies such as L1C, L2C and L5 being added to the spectrum of available signals. Most receivers are ahead of actual GNSS operations and will supply their receivers prepared to receive all GNSS and the maximum number of satellites and signals available. As a result, a modern receiver may boast over 400 channels with an average of around 200 channels in a receiver. A single channel will receive a single frequency from a single satellite for a single GNSS. Thus, current high-end receivers can track over 125 satellites at the same time! Be aware however that not all systems are currently at full operational capability (FOC). GPS and Galileo are at FOC whereas both Beidou and Galileo have limited coverage. Those working in the far East will benefit from Chinese Beidou, the Japanese QZSS and the Indian IRNSS as the local coverage is very stable. However, elsewhere in the world Beidou coverage is still marginal and QZSS and IRNSS coverage non-existent due to their regional character.

The processing of GNSS signals is still being improved although this is more evolutionary than revolutionary. The availability of ever greater processing power allows the GNSS receiver to allow, for example, for a better multi-path rejection. Also, receiving weak signals and being able to detect the direct signal from a confused set of GNSS signals is currently possible... Better tracking and multi-path rejection is not only the result of higher processing power but also of developments in antenna design. Thus, it becomes easier to move the GNSS in difficult situations whilst still keeping relatively stable and accurate positioning. The increased computing power also makes it easier to implement algorithms that have an increased accuracy when processing multiple GNSS signals at the same time. The increased processing power also makes it easier to integrate Precise Point Positioning (PPP) and heading solutions on a single receiver board making the units effectively smaller.

In general, the use of PPP seems to be increasing with major suppliers of correction signals now supplying PPP corrections for all four global GNSS. Most professional receivers are now dual frequency receivers, but these are expected to be replaced by triple frequency systems as the Galileo commercial service becomes available and GPS will have introduced L5 in more satellites. Triple frequency processing promises even more accurate RTK and PPP solutions with faster initialisation times.

A modern GNSS receiver will start within a minute even in situations where it has not been started for a while if connected to the internet such as in most land survey receivers. Without assisted-GNSS start-up times can be longer for a cold start. Re-acquisition times are now well below 15 seconds with the more high-end receivers boasting re-acquisition times of just a few seconds in most situations.

As stated earlier, most modern receivers employ internet connection to transmit their data to the survey computer. Serial connection (RS232) is still available with modern receivers although the number of ports are being reduced in favour of the network connection. The frequency of data output is becoming higher with less latency for the signals with a higher update rate. While in the past the interpolation of ‘intermediate’ positions between the 1s formal output was very visible, modern GNSS receivers can output at relatively high frequencies without a significant degradation of positioning accuracy. However, most manufacturers still advise using the 1 second output if the utmost accuracy is required in favour of update rates of 20 – 100Hz. The main advantage of the higher update rates is that for applications where this high update rate is required such as in dynamic positioning it is available with a limited degradation of positioning accuracy, especially when operating in PPP. 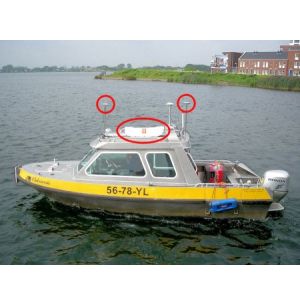