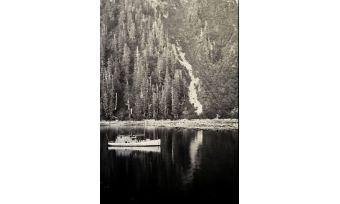 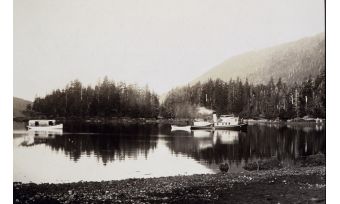 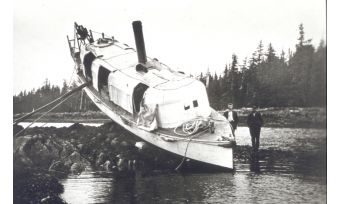 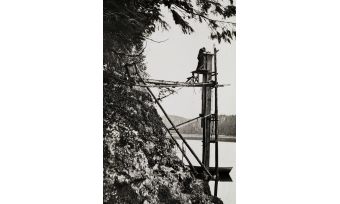 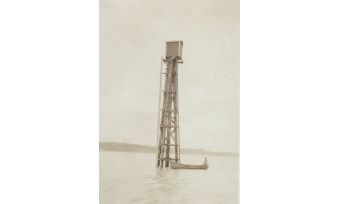 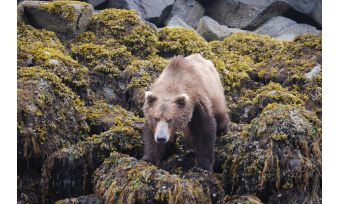 As opposed to the Alaskan Arctic, portions of Southern Alaska are relatively balmy, with average annual temperatures approximately 28 degrees Celsius higher than on Alaska’s north coast, thus giving rise to the humorous name ‘Banana Belt’. The weather here is modified by the warm Alaska Current, a remnant of the Kuroshio Current. Besides having relatively warm weather, Southern Alaska is a region of mountains interspersed with labyrinthine waterways, glaciers and rain forests.

Weather conditions range from glorious on some summer days, to seemingly continuous fog, torrential rains, and winter blizzards. Areas with over 150 inches of precipitation are not uncommon in SE Alaska. Even today, much of this area is sparsely settled and is a veritable wilderness. Bears, wolves, and other wildlife are quite common on land while whales, seals, and sea lions frequent the waterways. Wild surf accompanying North Pacific storms pummels the outer coast while strong currents, tidal ranges between 10 and 30 feet, and numerous pinnacle rocks rising nearly to the surface added to the danger of navigating the channels. Numerous submerged rocks and pinnacles in Alaskan waters bear the name of the unlucky vessel that struck it and was lost. Potentially hostile natives, landslides, volcanic eruptions, and the occasional great earthquake and tsunami rounded out the pantheon of difficulties facing the surveyors. The United States Coast Survey began operations in this challenging environment in 1867 when coast surveyor George Davidson headed a party of scientists that studied the geography and resources of Alaska prior to completing its purchase from imperial Russia. Davidson’s influential report was a factor in the completion of the purchase.

A few years later the Coast Survey vessel Yukon, commanded by William Healy Dall, was in Lituya Bay checking the accuracy of the old charts and determining the positions and heights of the surrounding mountain peaks that rose to over 16,000 feet. As noted in the Coast Survey report for 1874, “Vertical angles were measured to determine the heights of mountains in that region that serve as landmarks at sea. Observations for time, azimuth, and latitude were made at Lituya Entrance, and the position given on most charts found to be erroneous. The chart of the inner bay, by La Perouse, was tested, and proved to be generally accurate. Here the party on the Yukon had much difficulty in preventing the persistent attempts of the natives to board the vessel, but fortunately they were kept off without bloodshed. It is added in the report that these natives distill their own rum, and are well supplied with the best kinds of firearms.”

As the commercial riches of Alaska became apparent, demands were placed on the then Coast Survey (Coast and Geodetic Survey after 1878) to accelerate the surveying of its waterways. Ships were sent north to accomplish this Herculean task encompassing over 30,000 miles of tidal shoreline. This effort continues today. The methodology followed by the surveyors was basically the same up to the end of World War II. Captain Thomas Maher described the field season of 1911:

“I was placed in camp … to make astronomical observations for the determination of latitude, longitude, azimuth and magnetic variation, a plane table survey of the shore line, and in spare time a preliminary survey of the channel over the bar. Of course it was never thought that these Great Expectations would be realized, as it rained about fifty percent of the time and blew gales the balance. The ship party dumped our camp equipment and instruments on the beach and then departed immediately. That was part of the psychology underlying large scale surveying operations. Get away before the shore party finds out what they have been handed. I was a victim on numerous occasions, but the knowledge thus absorbed was very useful when I became Chief of Party.”

“During the following year work was resumed in this general area. Storm followed storm and the indications by the barometer were unreliable. On these trips to the northward and westward, part of the crew and many of the officers would not see port nor civilization from the beginning to the end of the season, as they were often left in camp, to carry on survey work while the ship went to the nearest port for supplies. Survey work, mountain climbing, surf landings, soundings in tide rips, create a necessary cooperation and closer association than is customary aboard ship. Of course there was the natural gripe about food for which there was a foundation. For three months, while doing launch hydrography, the lunch consisted of beans, pork, coffee and bread.” (Concerning launch lunch, the editor can attest from personal experience that the tradition of poor fare continued well into the 1970s.)

The practice of leaving parties ashore while the ship departed continued for at least another forty years in all Alaskan waters. Until the advent of radio communications, these parties were left to work on their own until the return of the vessel.

Storms were one problem for the surveyor, fog another. An example follows from the 1500-foot ridge leading north from Cape Muzon, near the southeastern tip of Alaska: “Our observing was over long distances, that to the Canadian side being forty or more miles in length. Frequent banks of fog swept in from the Pacific, obscuring distant stations, and twenty-eight ascents were made before the work was completed.”

Not all was striving against unrelenting nature. H. Arnold Karo, a future director of the Coast and Geodetic Survey, was commanding officer of a small survey vessel working in Glacier Bay when the following incident occurred while a shore crew was conducting a plane table topographic survey:

“On this particular day the party was working in the bight south of Berg Bay - a particularly choice location for the elusive strawberry. Seeing the rodman waving frantically and hearing him shouting to hurry up with the rod readings, the rest of the party were at a loss to understand this sudden burst of activity on his part. After each rod reading he would literally run up the beach to the next point, and would again wave frantically and beseech the topographer to hurry and read the rod. He was rodding toward the plane table setup and as he rounded the point and approached closer, the reason for all this agitation was soon apparent; for rounding the point about a hundred yards astern of him, was a black bear of no mean proportions! Each time the rodman stopped to give a reading, Mr. Bear stopped still and stood upright, almost in imitation. When the rodman started up the beach, after him came Mr. Bear on all fours.”

“This strange game of tag or "hare and hounds" was most amusing to the party gathered around the plane table. Closer and closer came the rodman and after him the bear. It soon became apparent that Mr. Bear was bent on a thorough job of investigating these strange creatures who had apparently interrupted his feast of strawberries. Having no firearms, the party armed themselves with the axe and stood their ground, although ready to take to the boat if necessary. The rodman reached the party and on came Mr. Bear. Brandishing the axe and clubs and letting forth blood curdling yells, the whole party gave a good imitation of a headhunter's dance. In spite of this unholy din, it looked as if a Kit Carson act was called for or else that discretion should be the better part of valor and the entire party would have to retreat to the boat. Just as the party was about to abandon its position, the bear turned around and lumbered off, having approached to within thirty yards of the party.”

Sometimes working in the vicinity of glaciers could be dangerous. The following two incidents, as described by Lieutenant George Morris, occurred during a plane-table survey of Taku Inlet, an area rivalling Glacier Bay in scenic grandeur:

“At one time, the rodman had gone ahead to select a point for a plane table set-up. Stopping before the overhanging face, he called back, ‘The glacier's dead along here, so this will be a safe spot and you can see well from here. Anyway, if it starts to fall, you can see it in time to run.’ He marked the spot and returned to the table to help carry the equipment to the new set-up. A sharp crack made the group look up from collecting the equipment in time to see a huge block of ice break from the top of the glacier and fall with a thundering crash, completely obliterating his recently-pronounced "safe" set-up point.”

“On another occasion, the topographer was working farther away from the shore, leaving the launch engineer to take care of the dinghy. In odd moments, the engineer took moving pictures of small pieces of ice falling from the face of the glacier. While so engaged, he failed to see a much larger piece than the one he was photographing fall into the water, but the loud crash made him look in time to see a small tidal wave racing towards the boat.”

“… The engineer was out of the boat and making for the beach like greased lightning as soon as he saw the tidal wave. As it struck the dinghy both wave and dinghy came racing up the beach, but he was two jumps ahead -- he broke the sprint record for men dressed in oilskins and sea boots. The dinghy was deposited without damage nearly one hundred feet from the water line.”

One thing was and is common to many of the surveyors who worked in ‘Alaska’s Banana Belt’ – love for the wild country. Captain Maher captured that feeling in the following passage:

“I was greatly impressed by the magnificent scenery of the Inside Passage to Alaska, which afforded a panorama of grandeur, the memory of which has never been effaced, creating a longing to see, once again, one of nature's great masterpieces. The high mountains, the narrow deep channels, the currents and swirls in Active Pass and Seymour Narrows, the whirlpools and tide rips at Ripple Rock (a feature of the past), the currents in Peril Straits and Sergius Narrows, beautiful Wrangell Narrows, Mendenhall Glacier, majestic Mt. Edgecomb, seen when approaching Sitka - here we have nature's handiwork at its best.”

(Editor’s note: This article is based on information excerpted from http://www.history.noaa.gov/alaska_tales.html )