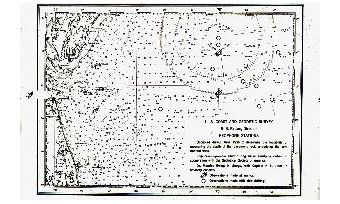 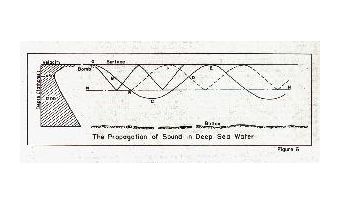 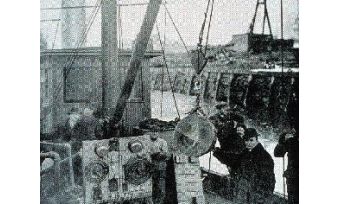 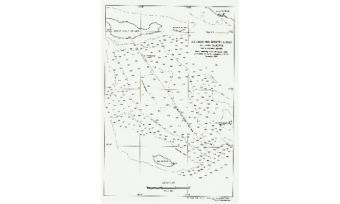 The existence of the SOFAR Channel has been known for many years. In the American geophysicist Maurice Ewing’s authorised biographical memoir The Floor of the Sea, the following passage occurs: “The first time Ewing’s seismic gear was tried at a thousand fathoms, all the shots exploded and were received…. Ewing had gone to Atlantis’s hold to see if, with his ear against her plates, he could hear the shots going off. They were loud and distinct, and he listened for close to five minutes to the echoes that bounced off the surface to the bottom and back. There were eight round trips in all, each over seven miles. This was man’s first experience of long-range sound transmission in the ocean.” The author claims that Ewing had reviewed the book for accuracy so the obvious errors in both distance and time are inexplicable. A similar story is told by Columbus Iselin (in a preliminary draft of a speech dated 2 November 1967), a long-time director of Woods Hole Oceanographic Institution, who recalled standing next to Ewing right after exploding a small charge in 3,000 fathoms of water south of Woods Hole. Ewing “reached over and put his fingers on the steel just outside the nice teak rail of the Atlantis. He detected six round trips of the signal. Almost instantly, he turned to me and said that he could transmit and detect sound anywhere in the ocean, provided a continent was not in the way.” Other variations of this story are found throughout many documents touching on oceanographic and historical research. So, was Ewing’s seismic experiment, whether noted by ear or touch, man’s first experience of long-range sound transmission?

Perhaps Maurice Ewing did have a ‘Eureka’ moment with one of his seismic experiments in which he visualised the ocean-wide transmission and reception of sound in the sea. But the history of human perception of sound in the sea far antedates the experience of Maurice Ewing. It is claimed that Aristotle was aware that sound could be heard in the water as well as in the air. Leonardo da Vinci noted that if one placed the head of a long tube in the water and placed the other end to one’s ear that ships could be heard at a great distance. In 1762, Benjamin Franklin conducted an experiment in the Delaware River in which he struck two stones together and observed that “the stroke may be heard at a greater distance by an ear placed under water in the same river, than it can be heard through the air.” Although Franklin only heard the sound at approximately a mile, he supposed that it could be heard “a great deal farther because the sound did not seem faint, as if at a distance, like distant sounds through air, but smart and strong, and as if present just at the ear….”. Another fifty years passed before the first experiments to determine the velocity of sound in water were conducted by Francois Beudant off Marseilles in which he obtained the remarkably accurate value of 1500 metres/second. These experiments were followed by those of Jean-Daniel Colladon and Charles-Francois Sturm in Lake Geneva beginning in 1826. Their experiments are better known than those of Beudant and they are often credited as the first to measure the velocity of sound in water. They obtained a result of 1435 metres/second. Over the next few years they conducted successful experiments over distances ranging up to 35,000 metres (nearly nineteen nautical miles).
With the exception of an attempt by American scientist Charles Bonnycastle to measure depth by use of explosive charges off the Coast Survey Brig Washington in 1838, this author is unaware of any other attempts to experiment with sound in the sea until the late 1870s when a number of American and European investigators began attempts to develop an underwater signaling system. These attempts were unsuccessful until 1898 when Arthur J. Mundy of Boston in collaboration with inventor Elisha Gray began experiments which led to the development of the Submarine Signal Company, a forerunner of modern-day Raytheon. In 1901, they ran a test in Boston Harbor in which sound was transmitted and received at a distance of eight miles. This provided proof of concept and within a few years Submarine Signal equipment was installed on buoys and lightships throughout much of the Western Hemisphere helping guide ships to port by a means similar to radio direction finding for distances approaching ten nautical miles. With the sinking of the Titanic, it became apparent that a means to discover objects in or on the water that could be hazardous to navigation during periods of reduced visibility was a necessity. Reginald Fessenden joined Submarine Signal Company in 1912 and set to work on this problem. By January 1914, he began tests on his ‘Fessenden Oscillator’. On the very first test, he was able to receive underwater signals at a distance of 31 miles and only turned back to Boston Harbor because of a blizzard. This test was followed by the famous test of April 1914 off the Coast Guard Cutter Miami which succeeded in reflecting sound off both an iceberg and the seafloor. This test also signalled the birth of an industry which was fueled by the race to develop submarine detection systems during World War I.

Submarine Signal enhanced its navigational systems in 1923 by adding radio transmitters which would allow a vessel to identify which navigational aid they were approaching and also that an acoustic signal would be emitted at a certain defined time interval from the time of radio transmission. This allowed one-way ranging to the sound source so that a vessel could both determine direction and distance to the navigational aid. This system was designed to automatically indicate the distance to a transmitting station out to a distance of 24 nautical miles. The United States Coast and Geodetic Survey (USC&GS), through the insight of Nicholas Heck, modified this system to become Radio Acoustic Ranging (see Volume 13, Numbers 1 and 2 of this publication), the first non-visual survey navigation system ever developed. With the first operational use of RAR off the coast of Oregon in 1924, the sound emanating from an undersea explosion was received 206 miles away without any diminution of signal strength. Following this, in 1928 French investigators conducted an experiment between Toulon and Algiers and were able to receive the sound from the detonation of 30 kilograms of explosive over a distance of 400 miles in the Mediterranean.
As noted by Peter Wille in Sound Images of the Ocean in Research and Monitoring, in 1919 , Hugo Lichte, a German physicist published a paper in Physikalische Zeitschrifte which laid out the theoretical framework for sound transmission in the ocean. Significantly, according to Wille, this paper also predicted the existence of ocean-wide sound ducts caused by the refraction and trapping of sound waves in the layer of low velocity water which is sandwiched between higher velocity surface and deep waters which occur throughout much of the world’s oceans. Because of anomalies in sound transmission and reception experienced by the C&GS while using radio acoustic ranging navigation, they designed a large-scale field experiment to determine the velocity and ray paths of sound waves off the Southern California coast in the Santa Cruz Basin in November 1933. The data from these experiments were analysed by Lieutenant Paul Smith and Commander Otis Swainson and published in the Field Engineers Bulletin of the C&GS in 1934 and 1936 respectively. Significantly, an article by Maurice Ewing followed Swainson’s article in the1936 Bulletin which would indicate that he was aware of early studies of sound transmission in the ocean. Ewing also collaborated with Nicholas Heck, the developer of radio acoustic ranging, in early marine geophysical experiments. It was noted by Japanese hydrographer Susumu Kuwahara in 1938 that the tests in the Santa Cruz Basin “verified for the first time that the sound waves follow the well-known physical laws of geometrical optics” and that “the sound waves are refracted and reflected according to the change in density of the medium….”

Addressing the inquiry as to whether Maurice Ewing’s undated experience of listening at the hold of the Woods Hole ship Atlantis or feeling vibrations of vertical reflections at its teak rail was man’s first experience of long distance sound transmission in the ocean, the conclusion has to be a resounding ’no’. Maurice Ewing’s first sea-going experience was in June 1935 on the C&GS ship Oceanographer during which he conducted his first oceanic seismic refraction experiments in an attempt to determine the basement structure of the continental shelf. This was well after the theory of sound transmission in the ocean had been described by Lichte and well after many instances of sound transmission exceeding 100 nautical miles had occurred. Although it would seem that Maurice Ewing has absorbed a little bit more credit than necessary in this particular instance, his great contributions to ocean science should be remembered. Certainly the offshore oil exploration industry is indebted to him for his pioneering work in seismic reflection and seismic refraction. All ocean explorers who have made use of deep sea cameras can trace their use of these to his first deep sea camera which was produced in 1940 and tested on the US continental shelf and slope. Concerning his role with the deep sound channel, he conducted tests that demonstrated its continuity on ocean basin scales and was the first to perceive and convince the naval powers of the usefulness of long-distance sound transmission and reception for defence purposes. Perhaps a key to understanding Maurice Ewing lay in Sir Edward Bullard’s memoir of Ewing in the Biographical Memoirs of Fellows of the Royal Society published in 1975. He quotes Ewing as stating the following during his short seismic test expedition on the C&GS ship Oceanographer in 1935: “I got proof that the measurements can be made at sea ….This is by far the most important project with which I have yet been connected. It is so arranged that I see no possibility of anyone stealing the credit from me.” Strangely, consciously or subconsciously, in this instance he did not seem to have this concern for others.