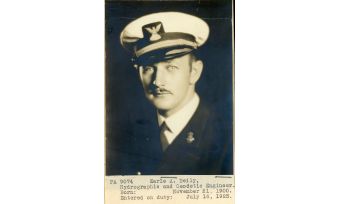 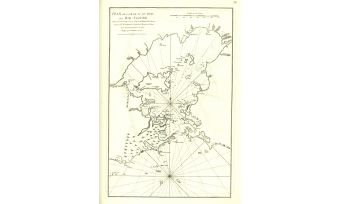 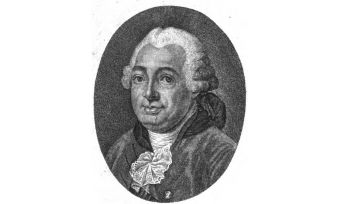 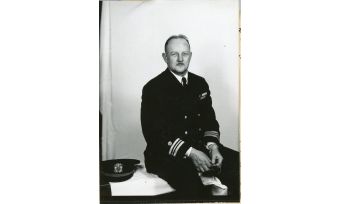 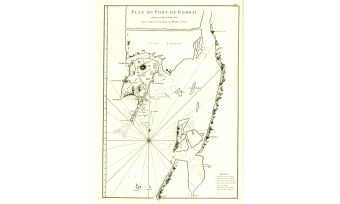 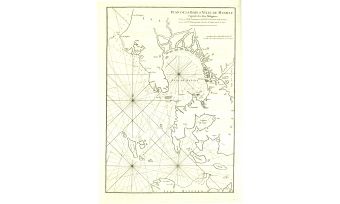 The article below is reproduced from the Field Engineers Bulletin of the US Coast and Geodetic Survey for December 1936 with minor changes. Lieutenant Earle Deily (1900-1995), the author, was then a veteran of 13 years in the Survey having served on both coasts of the United States, Alaska, and the Philippine Islands. He was a scholar of the history of hydrography as well as being an outstanding hydrographer and geodesist. During the Second World War he served as an artillery surveyor with the Seventeenth Field Artillery Observation Battalion and saw action throughout France and Germany. He retired as a captain in 1954 but was advanced to the honorary rank of Rear Admiral based on his war combat experience.

Gold is where one finds it and one certainly finds things in the most unexpected places. While browsing around in an antique shop some months ago in search of copies of Blunts ‘Coast Pilot’ of which I am making a collection, I casually asked the manager of the store if he had any old maps. To my surprise he replied that he had a book of old maps that had been lying around there for some time and that he would gladly dispose of cheaply. He finally unearthed a large, dusty, canvas covered book from the bottom of a pile of seeming junk. Outwardly the volume appeared extremely ragged but the first chart I glanced at on opening the book bore a notation in the margin ‘Published according to Act of Parliament by Alexander Dalrymple, December 10, 1771’.

On stripping the temporary canvas cover from the volume I saw a fine leather binding and the words Neptune Oriental, which was enough information for me to quickly replace the canvas and attempt to conceal my excitement before calmly enquiring the small price of which he was continually speaking. It was so ridiculously small that I immediately paid it and, securing a receipt which said ‘Book of old maps’, dashed from the store with the book under my arm. To my surprise and great pleasure on a later careful examination I found it to be complete and all the charts well preserved.

The Neptune Oriental, a bound collection of nautical charts dating from 1730 to 1772, is probably less known to American hydrographers than the Atlantic Neptune. Compiled and first published by DeMannevillette in France in 1745, the Neptune Oriental should be of interest to Coast and Geodetic Survey officers because it included four charts of the Philippine Islands, more particularly of the Sulu archipelago, and undoubtedly suggested the name ‘Atlantic Neptune’ to the English atlas covering the east coast of North America, which was published some thirty years after the Neptune Oriental.

The Neptune Oriental consists of 69 charts and views embracing the coast of Europe from the English Channel to the Straits of Gibraltar, the coasts of Africa, Arabia and India, the Malay Peninsula with the islands of Sumatra, Java and Bali, Indo-china and the China Sea, the Sulu Archipelago, the Bay of Manila and two other charts of portions of the west coast of the Island of Luzon in the Philippines. Detailed charts of Port Louis and L'Orient in France, Tringuemalay (Trincomalee) in the island of Ceylon, and a Plan of the Bay and Port of Rio de Janeiro, dated 1730 and verified in 1751, are also included (Figure 2). All these were bound in one volume, 16 x 22 inches, which lacked title page, frontispieces and maps numbered 10 and 46..

This chart atlas was a product of the French due to the efforts of DeMannevillette, who, in 1762, became the director of the ‘Depot des Cartes et Plans de la Navigation des Indes’. The results of thirty years effort, the first edition, probably published in Paris, appeared in 1745, the second edition about 1775, and a supplement in 1781.

That the work of gathering and compiling the necessary data for such a monumental work and the correcting of such charts as were existing at such an early date must have been tremendous is self-evident, especially when one realises the possible sources of information concerning the East which, up to the l8th century, had been explored so little. It is amazing that so much was known at that time of many of the remote and even now comparatively little known portions of the globe.

That the French realized the value of a systematic gathering of nautical information for the use of their merchant marine as well as for the Navy so early is shown by the following portions of a ‘sensible ordinance’, of the date August l68l, concerning hydrography.

"Of the Professor of Hydrography

Art.1 .- We will, that in the most considerable maritime towns of our kingdom, there be Professors of Hydrography to teach publicly navigation.

Art.2 .- The Professors of Hydrography must draw, and instruct their scholars to make them capable of figuring the ports, coasts, mountains, trees, towers and other things serving for marks to harbors and roads, and to make Charts of the lands they discover.

Art.5 .- The Professors of Hydrography shall carefully examine the Journals of Voyages lodged with the Register of the Admiralty, of the place of their establishment, and correct them in preference of the Pilots, who had erred in their track."

The fact that the journals and charts of individual navigators must have been examined and the information recorded is evidenced by the numerous sailing tracks laid down on many of the charts of the Neptune Oriental. These tracks were transferred in such detail that the days' run of the vessel can be detected easily.

Chart No. 22d of ‘The Islands and Dangers situated to the northeast of the Island of Madagascar’ delineates a foul area and shows some 20 such tracks with the names of the vessels, commanders and the dates of sailing. These dates range from 1712 to 1776.

Chart No.52, ‘A Chart of the China Sea’, also shows many such tracks, particularly in that great unfrequented area in the China Sea lying to the westward of the island of Palawan. This chart shows the position of ‘Scarboro Shoal’ and contains the following note which may possibly be the first reference concerning that important danger lying to the west northwestward of Manila Bay - "This shoal is placed according to the Spanish Account, having been seen in 1755 by a ship bound to Manila from Macao."

Five of the charts in this collection are copies of the work of Alexander Dalrymple, the eminent British Hydrographer; laid down chiefly from his personal observations made in 1761, 1762, 1763 and 1764, and printed according to an Act of Parliament. These five charts are Charts 33, 52, 54, 55, and 56 titled respectively: Chart of the Northern Part of the Bay of Bengal; A Chart of the China Sea; A Map of part of Borneo and the Sooloo Archipelago; A Chart of Felicia and Plan of the Island of Balambangan; and The Sooloo Archipelago.

As the Neptune Oriental is a French publication, the longitudes given were related to the Meridian of Paris and so noted on the plates. The charts are profusely illustrated with views of the various landmarks and ranges. Detailed sailing directions are included for entering harbours.

Among the many views in this volume is a well executed one of the Harbour of Goa, the Portuguese capital of the Indies. The accompanying reproductions are particularly illustrative of the more detailed charts in the Neptune Oriental. It is interesting to note that these plates show how the Portolano lines were already evolving into the compass rose.

The ‘Plan De La Baye et Ville De Manille’ is of especial interest to Coast and Geodetic Survey officers who have been on the Philippine station. That the area to the southward of Manila Bay is greatly distorted of course is self-evident. The wide opening into Laguna de Tual seems to be an attempt to show the Pansipit River. The passage between Golo and Mindoro is certainly wider than as remembered by anyone who has passed Cape Calivite.

Jean Baptiste Nicolas Denis d'Apres de Mannevillette (1707-1780), to whom the Neptune Oriental has been ascribed, studied mathematics at Paris. In 1726, he sailed along the north coast of San Domingo aboard the Marechal d'Estrees. With the aid of an octant and instruments invented by James Bradley, he corrected the latitudes of a number of points during a voyage to China. This happily suggested the task of correcting all the maps of India, the results of which appeared in the Neptune Oriental.

Alexander Dalrymple (1737-1808) was appointed a Writer in the service of the East India Company in 1752. On his first voyage to the East from India, Dalrymple visited Sulu and concluded a commercial treaty with the Sultan. This voyage was the means of giving the English a share in the spice trade, which was previously controlled by the Dutch. On his second voyage, in 1763, he obtained a grant for the company on the island of Balambangan and of the north end of Borneo and the south end of Palawan, with the intermediate islands. Thus began the holdings of the present British North Borneo Company.

From the time of his return to England in 1765 he was almost constantly engaged in collecting and arranging materials for a full exposition of the importance of the Eastern Islands and the South Seas. In 1779, he was appointed by the East India Company to examine their ships' journals and publish charts and nautical instruments which eventually amounted to 58 charts, 740 plans, 57 views of land and 50 nautical memoirs. These apparently were compiled from all known sources.

That he must have collaborated with DeMannevillette and borrowed from his work, as well as DeMannevillette borrowing from him, is particularly evidenced by the fact that one of the charts incorporated in the Neptune Oriental bears the following title: ‘A CHART of the CHINA SEA Inscribed to Monsr. D'APRES de MANNEVILLETTE the ingenious Author of the NEPTUNE ORIENTAL As a TRIBUTE due to his LABOURS for the benefit of NAVIGATION And in acknowledgement of his many signal Favours to Dalrymple’.

Alexander Dalrymple was appointed Hydrographer to the Admiralty on the establishment of the office in 1795. He spent twelve years in this position. But little was accomplished as this period was spent in arranging documents, compiling charts and engraving plates. He apparently preferred to risk blame for lack of immediate show rather than be held responsible for the issue of charts that were incomplete and inaccurate. This necessary period of compilation was later repeated in the United States where an impatient Congress demanded of Ferdinand Hassler that charts be forthcoming immediately after the establishment of the Coast Survey. The British Admiralty also resented the non-productiveness in the way of printed charts and after an investigation Dalrymple was invited to resign. He never recovered from the humiliation of his enforced retirement and died within a few months.