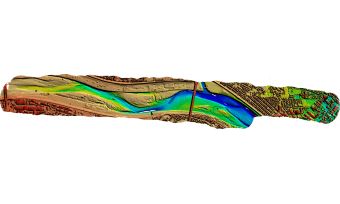 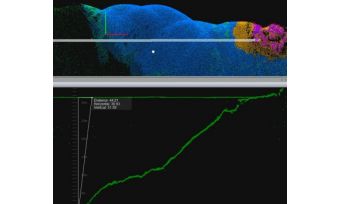 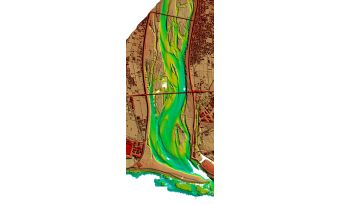 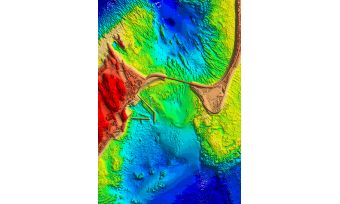 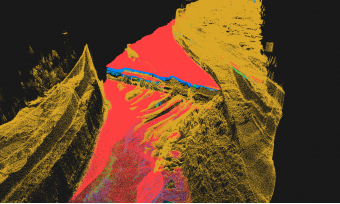 In March 2015, Leica Geosystems conducted a series of demonstration surveys in Japan with the HawkEye III Airborne Topographic Bathymetric Lidar system. This demonstration was designed to prove the depth performance and general capabilities of the HawkEye III system in Japanese waters. It ambitiously targeted 13 geographically separated areas ranging from land-locked rivers, coastal estuaries and coastal strips to offshore islands and coral reefs. The HawkEye III successfully demonstrated its capabilities, collecting seamless datasets in diverse coastal and river environments as well as setting new records for depth penetration for both the HawkEye III deep sensor and the Chiroptera II shallow sensor.

Flying operations commenced in several rivers and coastal areas centred on the Tokyo regions in early March 2015. All three sensors were installed into a single PASCO Cessna 208B aircraft using a two hatch configuration, the Chiropter II and topographic sensor along with the RCD 30 Camera were installed over the forward hatch, while the larger HawkEye III deepwater sensor was installed over the aft hatch. A GNSS receiver and IMU were attached to each base plate assembly over each hatch.
Calibration of all sensors was conducted simultaneously by Leica engineers in a traditional topographic Lidar manner at the commencement of operations. Processing of calibration data for all sensors was conducted within the Leica Lidar Survey Studio (LSS) software. Once calibrated, the system is then flown over known seabed areas to confirm the depth accuracy standards are being met.
During data collection all three Lidar sensors and the RCD 30 camera were controlled and operated by a single operator using the dedicated Leica Operating console software. This approach ensured the optimum settings for each sensor were utilised during the critical data collection stage and the best possible overlap and depth performance for each sensor is achieved in the prevailing water conditions through simultaneous integrated operation.

All three sensors operated with the new oblique orbital scanner, which maintains scanning at a near optimum angle of incident to the water surface reducing the effects of wave action and calm conditions on accuracy, increased density and feature detection through the forward and backward scanning to each point and reducing shadowing on near vertical features.

GNSS / IMU data for each sensor hatch combination was processed in a tightly coupled solution relative to local GNSS base stations. All data was processed relative to the GRS80 ellipsoid and WGS84 datum. This approach allowed the generation of a seamless topographic / bathymetric dataset.
Raw Lidar sensor data for each sensor from each flight was then processed simultaneously in a truly integrated process within the LSS. This approach to the processing of multiple sensors not only allows for the best possible outcome for each sensor maximising very shallow-water performance whilst obtaining the best possible deepwater penetration and ensuring no gaps between the two sensors, but also allows for the most efficient processing and cleaning of the three datasets.
A further advantage of processing all three sensors simultaneously in the same package was that data from all three sensors was used to determine a truly integrated surface datum for the automated classification of seabed points which combined with localised water surface level measurements allowed for a consistent and accurate correction for refraction of light across both bathymetric sensors. This approach allowed for an efficient modelling of the water surface which resulted in all data being consistently classified and corrected for swell along the coastline and for slopes in the water surface in the river environment. An example of the surface water modelling results achieved is shown in Figure 5. This image shows a dam across the Yoshino River measured with the Hawkeye III system.
Results in the more turbid environments were further improved through the application of the new Leica Turbid Water Enhancement Technology. This new processing technology applies specialist processing algorithms to the full waveforms to allow additional seabed data to be extracted from the returns in more turbid shallow-water environments such as rivers and coastal estuaries. The outcome of this software is increased coverage in turbid areas, which is critical for survey in coastal estuaries and river environments.

A 4-stage approach to the processing of bathymetric Lidar data ensures that the data collected satisfied the requirements of the demonstration and was of a suitable quality prior to leaving each mobilisation site.

The first stage involved the processing of GNSS Data and then Lidar data from all three sensors simultaneously within the LSS software to produce an initial automatically classified point cloud corrected for refraction from the water surface.

The second stage then involved the field quality control of the water surface model, optimisation of the algorithms to generate the best possible results followed by rapid cleaning of the water column and seabed data to allow quality control checks of the sensor overlaps, line overlaps and assessment of achieved point density and coverage. These overlap checks were presented as colour coded images and statistical comparisons, and in general the differences between sensors and lines and flights was in the order of 0.1m or better.

Images in this article were generated from stage 2 field processed data which was supplied at the end of March as the team and system demobilised. Further stages involve the post field final cleaning of the data and generation of derived products such as seamless DEMs and final products.

The trial was an outstanding success; despite the challenging weather and water conditions the project team efficiently positioned the aircraft to take advantage of the best weather windows as they appeared, allowing 9 of the 13 target areas to be successfully flown.
Seamless data was collected from 500kHz topographic data, to 35kHz shallow-water bathymetric data to depths down to 30m in places using the Chiroptera II, and then 10kHz deepwater bathymetric data down to depths greater than 50m in places using the Hawkeye III. Overlap between sensors was automatically determined and generally of the order of 0.1m or better.

Despite recent rainfall and less than ideal water conditions in the Tokyo region at the start of data collection, results were obtained in the inland Tama River (see Figure 1) west of Tokyo and in the Tenryu River coastal estuary south west of Tokyo (see Figure 3). The HawkEye III system was the first airborne Lidar Bathymetry system to successfully collect data in some of these turbid Japanese river environments.

In the clearer waters of Japan’s southern islands records were broken, with the Chiroptera II system obtaining depths in excess of 30m (extending its operating specification well beyond the quoted 15m,
see Figure 2), and the HawkEye III sensor achieving depths over 50m proving their capabilities in clear waters.
The HawkEye III system proved its capabilities in a wide variety of demanding shallow-water survey environments as well as excelling in the deepwater environment. The HawkEye III System exceeded manufacturers operating specifications for flying altitude and depth performance for both the shallow and deep sensors.

‘Subsea Internet of Things’ to Transform Amount of Information Available