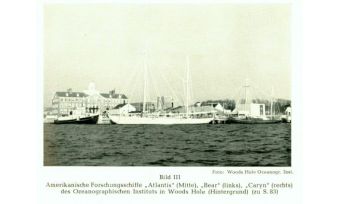 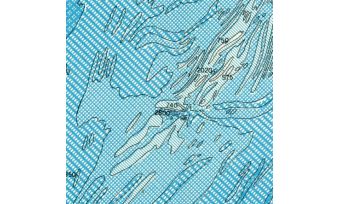 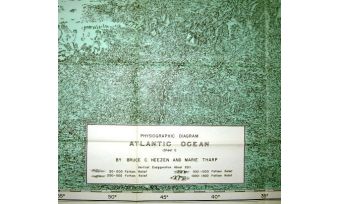 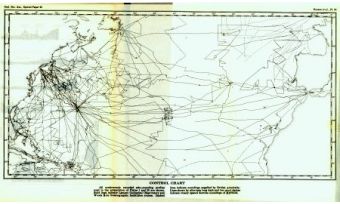 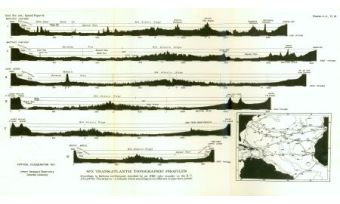 Following Maurice Ewing’s first cruise to the Mid-Atlantic Ridge, two more were made by the end of the 1940s. The first of these was led by Ewing while the second was led by Bruce Heezen. Although Gunter Dietrich’s paper was referred to in the 1949 paper by Ivan Tolstoy and Ewing (see part I in last issue), neither seems to have comprehended its significance as he reported in the November 1949 National Geographic magazine: “Crossing the ridge, we drew a detailed profile of its peaks with our fathometer. Flanking the central highlands, we found deep trenches separating the main Ridge from the lower terraces on either side.

These trenches drop down to depths of more than two miles, while the central peaks of the main Ridge are approximately one mile under water. We found similar trenches when we again crossed the Ridge farther south, but do not yet know whether they run its entire length. These trenches may mark the locations of the great faults that undoubtedly extend somewhere through or near the Mid-Atlantic Ridge and which are the sources of many submarine earthquakes that centre there.”

This statement does not refer to a central ‘trench’ but Ewing was definitely on the trail at that time. Part of the problem of these early descriptions of findings is evolving terminology. Ewing’s first pronouncement in the 1948 National Geographic article refers to a ‘rift’ for an east-west feature, then trenches for north-south features on the ridge. Dietrich referred to ‘striking depressions’ for features that he interpreted as being in the centre of the ridge and today referred to as the rift valley.

Ivan Tolstoy, as sole author, produced the next significant paper regarding the MAR in 1951. It was an expansion of the first paper that he and Ewing had produced in 1949 for the Geological Society of America. Tolstoy could have been famous in the annals of MAR exploration and interpretation based on the map he produced with this paper and its accompanying profiles. However, Tolstoy was fixated on the east-west trough and the parallel trenches and ridges in the vicinity of what is now known as the Atlantis Fracture Zone. Unwittingly, he showed the MAR median valley heading north to east of the Atlantis Massif and heading south at the western end of the active fault zone. His map compares well to modern multibeam maps of the Atlantis Fracture Zone and associated features. However, he did not recognise the median valley on the map or the significance of what he had mapped. He had one more chance at making what in retrospect would have been the discovery and announcement of a median rift valley. He produced an east-west profile of the Atlantic seafloor at latitude 31N. It was his misfortune to produce this profile with a vertical exaggeration of 3.3 to 1. By comparison, Dietrich’s profiles were drawn at 100 to 1, and later profiles by Bruce Heezen and Marie Tharp at 40 to 1. Because of the low vertical exaggeration, features appeared subdued and Tolstoy missed the near perfect symmetry of the central highlands and the accompanying deep valley. He even pointed out the deepest portion of the median valley by placing a 2020 depth value over the deepest portion of the central valley (Figure 2).

As Tolstoy had major spinal surgery in late 1947, it is unclear if or when he ever went to sea again as chief surveyor/ bathymetrist for Lamont. Bruce Heezen seems to have begun his tenure as senior surveyor and bathymetrist for Maurice Ewing in late 1948 and led the Atlantis cruises to the MAR over the next four years and then cruises of the R/V Vema after the acquisition of that vessel by Lamont in late 1952. Although their exploration of the Atlantic basin was continuing, Heezen and Ewing concentrated on the concept of turbidity currents and the role of submarine canyons as conduits for these phenomena during this period and Heezen’s reputation as a marine geologist was secured.

The MAR was not totally forgotten, however, as five papers were written over the next decade that helped change our view of our planet. The first of these was a short 1953 paper by Heezen, Ewing and Miller that contained both a bathymetric profile and magnetic profile of Heezen’s 1948 15N trackline from Dakar to Barbados. This paper had little impact but is notable for containing the first magnetic anomaly profile of the basin of the Atlantic. If the two sides of this profile relative to the ridge axis had been mirrored, the magnetic symmetry from one side of an oceanic ridge to another would have been seen. (It was another 15 years before symmetry was noted as a result of other surveys, a major proof of plate tectonics.) Also in 1953, the British began investigating the MAR under Maurice Hill. The following year, Hill noted the existence of a ‘deep central trench’ in the MAR extending over 70 nautical miles from 47 45 N to 46 34 N. Then in 1956, Ewing and Heezen, published Some Problems of Antarctic Submarine Geology. This paper was in anticipation of the upcoming International Geophysical Year and declared the existence of a worldwide rift in the seafloor that followed the oceanic ridges. This paper gave credit to the British scientists R. B. Seymour Sewell and G. D. Wiseman of the 1937 John Murray Mabahiss Expedition to the Carlsberg Ridge of the Indian Ocean, to Maurice Hill for his 1953 work in the North Atlantic, and to Theodor Stocks of the 1925-1927 Meteor expedition for producing profiles showing that the MAR and Carlsberg Ridge are characterised by “a median rift zone which follows the crest of the ridge very accurately.” Sewell and Wiseman were also the first to point out the similarity between the oceanic ridges and the East African Rift Valley as similar features. Ewing and Heezen also gave credit to Beno Gutenberg and Charles Richter for their “magnificent studies on seismicity” that “can be used to supplement the bathymetric data in a powerful manner.”

1957 was an interesting year. Gunter Dietrich published a German-language textbook on oceanography in which he included his 16 50 N profile of the ‘striking depression’ that showed so prominently in his 1939 publication. No one noticed. On 31 January, Maurice Ewing announced the existence of the worldwide rift in the New York Times: “One day, Marie Tharp, a cartographer at the Observatory, was working on charts of the Atlantic Ocean bottom. She noticed that the deepest rifts in the mid-Atlantic formed the locus of an oceanic earthquake belt. When Miss Tharp noticed the mid-Atlantic-rift-seismic zone, she pointed out her discovery to Dr. Bruce Heezen, a research associate at the Lamont Observatory. Drs. Heezen and Ewing and their associates examined other undersea topographical profile charts and unpublished data in the Lamont files.” This was the first of a number of evolving stories as to how Marie Tharp discovered the rift valley.
This same year Heezen was co-author with an undersea cable engineer of Oceanographic Information for Engineering Submarine Cable Systems, a paper published in the Bell System Technical Journal, in which he described the rift valley and its association with seismic activity. He produced a small black and white graphic of the rift valley in the North Atlantic Ocean extending from 60N to 30N. Although this area contains the Charlie Gibbs Fracture Zone at 52N, this large feature is shown as an east-west bend in the axis of the MAR. Fracture zones confounded Heezen, and as will be shown, he and Marie Tharp basically ignored their existence in a large beautiful ‘physiographic diagram’ that was folded into a pocket in the back cover of the 1957 Bell Telephone Technical Journal (Figure 3). This diagram was the first of the celebrated Heezen-Tharp physiographic diagrams although there was no accompanying explanation. It was actually a 3D map of the North Atlantic Ocean between 50 N and 17 N. The most prominent feature was the MAR and associated rift valley that bisected the map.

The explanation of this map was published by the Geological Society of America in 1959 as Special Paper 65, The Floors of the Oceans. This paper was the first to attempt to describe the bathymetry of an oceanic basin. As in the Bell Telephone Technical Journal paper, no credit was given to Marie Tharp as discoverer of the rift valley. The same year Maurice Hill published a paper with nine profiles that unambiguously showed a continuous median valley.

In not one paper published in a scientific journal with Heezen, Tharp, or Ewing as authors through 1959 was there a claim that Marie Tharp and Bruce Heezen were the first to discover the median rift valley of the MAR or that they were the first to note the same. However, in a 1960 Scientific American paper on the Great Global Rift, Heezen gave the second version of the claim that Marie Tharp had discovered the rift valley in 1953 while she “and I were making a detailed physiographic diagram of the floor of the Atlantic, based upon a large number of echo sounding profiles. As the preliminary sketch emerged, Miss Tharp was startled to see that she had drawn a deep canyon down the centre of the Mid-Atlantic Ridge.”
A third version of this story was told by Heezen in a biography of Maurice Ewing in 1974: “Marie’s job for me was to decide what a structure was – whether a rise in the echo soundings represented a hill or something longer like a ridge – and to map it. In three of the transatlantic profiles she noticed an unmistakable notch in the Mid-Atlantic Ridge, and she decided they were a continuous rift valley and told me. I discounted it as girl talk and didn’t believe it for a year….” Heezen implies but doesn’t state that this was 1952. This version with slight variations has become the standard version of discovery of the rift valley by Marie Tharp with late 1952 as the date of discovery.

As a footnote to the 1974 story, the following year Bruce Heezen stated in an interview: “Marie did not point out to me the close coincidence between the [earthquake] epicenters and the location of the rift. I had pointed it out to her… from then on she used the data of the epicenters very closely for the rift valley correlation.” All of the principals in the discovery of the true nature of the Mid-Atlantic Ridge have now passed on and there is no way to determine the absolute truth of any or all of these stories. However, in a last and final look at the mapping of the MAR, the maps and graphics produced by Heezen and Tharp as well as some of the published material they used will be looked at in the next issue of Hydro International. A version of the true story can be found in their maps and graphics as well as the surprising role of Gunter Dietrich in influencing this story of discovery.