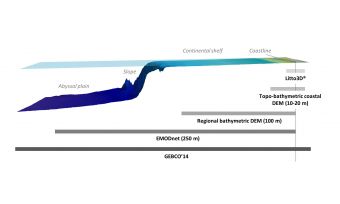 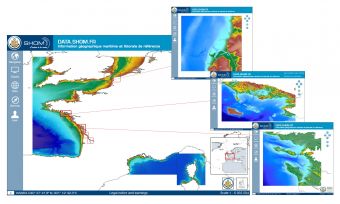 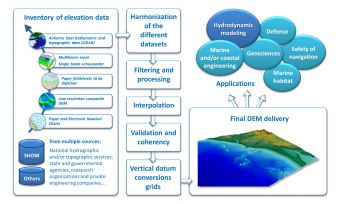 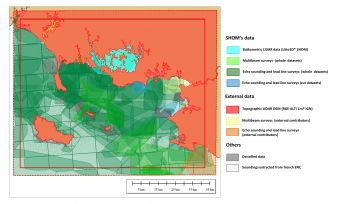 SHOM contributes routinely to the preparedness against coastal risks along French coastlines. For this purpose, regional to coastal digital elevation models are built for implementation in forecast systems against rapid flooding. By integrating users’ needs and its expertise relative to bathymetric data, SHOM offers new fit-for-purpose products along the French coastline.

Bathymetric data are mainly used for producing nautical charts. However, a wide community of users requires continuous bathymetric surfaces. SHOM has recently started building nested digital elevation models across the French Waters (including overseas territories) for the purpose of hydrodynamic modelling. These are also used for other purposes such as sedimentology, habitat mapping and coastal planning. Building national digital elevation models means that a mix of local hydrographic knowledge, data management and particular attention to users’ needs must be brought together.

SHOM’s DEMs are routinely used by practitioners focusing on multi-hazard marine risk assessment (tsunami flooding, storm surge, coastal erosion, etc.). Their specifications have been defined to be compatible with the requirements of the hydrodynamic modelling community. Following previous work by Eakins and Grothe (2014) and users’ requirements, their main characteristics include:

Based on these requirements, SHOM developed a nested products line including regional bathymetric DEMs covering all the French coasts at a resolution of 0.001° (around 100m) and topo-bathymetric coastal DEMs in specific areas of interest at resolutions of 0.0001° or 0.0002° (10-20m, Fig. 2). All of them are supplemented by GEBCO’14 and EMODNet bathymetry at the broad scale end of the spectrum, and from the national Lidar initiative Litto3D® at the other end.

Building individual DEMs implies a series of tasks illustrated in Figure 2. The first step includes the inventory of data collected by SHOM along with external data. Although SHOM is benefiting from a national legislation that enforces data owner in the EEZ to provide their data, this work is not straightforward and benefits from collaborations at the local and the international level. EMODnet and/or GEBCO might be used as a complement for unsurveyed areas. The second step focuses on the harmonisation and processing of the different sources of data so that they are registered to a similar vertical reference. For this task, SHOM mainly uses the BathyElli conversion grids along the coasts of the Channel, the Atlantic and the Mediterranean Sea. These conversion grids allow vertical shifting from marine vertical references (Chart Datum, LAT, Mean Sea Level …) to the ellipsoid. Following these tasks, filtering and manual edition of non-coherent soundings is undertaken in order to enhance morphological coherency. This process is then followed by surface interpolation. Splines functions are used for their efficiency to honour variable density data providing a representative smooth and continuous surface. Finally, the last task deals with the inspection of the resulting DEM. The lack of coherence or the presence of artifacts is treated by further filtering out of the original soundings prior to a new interpolation. Product quality is evaluated in particular based on visual inspection (slope, cross-section and 3D views) and the cross-validation of the DEM using data sources that have not been incorporated into the generated product.

Several regional and coastal DEMs were released in 2015 and populated data.shom.fr. The portal will be gradually fed by future productions along the French metropolitan and overseas coasts.

Each DEM is released through pre-packed files, including:

Even if SHOM has elaborated the tools and the expertise needed to produce a nationwide coverage of bathymetric models, some improvements are foreseen. Tools still need to achieve a semi-automated deconfliction (Figure 4) of overlapping datasets. Deconfliction is presently performed manually for high-resolution DEM. Likewise, a methodology to update published DEM using new dataset is currently being evaluated and will be implemented in our production scheme.

Moreover, an evaluation of the supplementary set of information needed for the data user to evaluate the accuracy and the representativeness of the DEM product is currently being carried out. The result will include an estimate of the uncertainty of the DEM from the relative precision of the sources data and the intrinsic evolving character of the seabed assessed by surface sediment records.

More importantly, progress made in acquisition programs such as Litto3D® and improvements of the vertical reference surfaces at sea (BathyElli) will directly benefit coastal DEM enhancements.

Armed with a full range of expertise in marine geographic information, SHOM has elaborated multi-scales nested DEMs to support maritime and coastal public policies. Particular attention is brought to topo-bathymetric high-resolution DEMs in order to facilitate their use in most coastal environment issues. Such production requires all SHOM’s modern and legacy data and knowledge in order to manage the different DEM development steps. It also takes advantage of a necessary collaboration between organisations at multiple levels (local, national and international) in order to elaborate robust and up-to-date grids. These DEMs meet a wide variety of needs thanks to their specifications and their availability on SHOM’s portal. Presently, a national coverage at 100m resolution is available. Further improvements will be gained through the production of coastal DEM of other coastal zones at risk.

This work is supported by the French national research agency (ANR) programme TANDEM in the frame of "Investissements d’Avenir", under grant ANR-11-RSNR-00023-01; and by the HOMONIM project (SHOM, Météo France), which is partly funded by the risks management state agency in the framework of the national plan against rapid flooding.