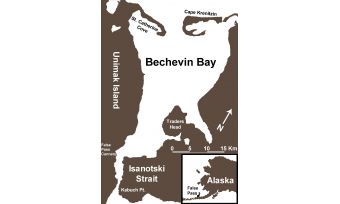 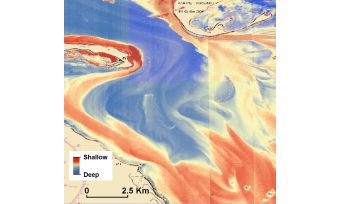 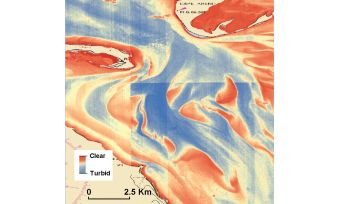 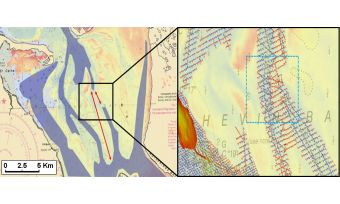 False Pass, AK, USA, is the eastern-most passage through the Aleutian Islands between the Bering Sea and the Pacific Ocean and provides a passage for small to mid-size vessels. The passage is considered an alternative route to Unimak Pass, AK for vessels from mainland Alaska and is estimated to be shorter by 160 to 240km. False Pass is closed every winter due to sea-ice cover that freezes the inlet system around October-November and melts only towards the spring (around March). As a result, the soft sediment of the seafloor contains mud and sand that may change the path of the channel after the sea ice has melted.

Preparation of False Pass for the Summer/Fall vessel traffic requires many resources in a narrow springtime window to identify the main channel and to delineate it with Aids to Navigation. The surveys are typically conducted by the US Coast Guard (USCG) buoy tenders using small boats and reconnaissance-style single-beam lines. This paper demonstrates the potential of using a turbidity map generated from a single-image Satellite-derived Bathymetry (SDB) to play a key role in the future of the survey planning and determination of survey priorities.

Bechevin Bay is a large tidal basin located at the southwestern end of the Alaska Peninsula (Figure 1). The south of the basin connects to the Pacific Ocean and the north side opens to the Bering Sea through a wide tidal inlet. The northern portion of Bechevin Bay is 2.7km wide and its bottom is shallow with abundant sand bars and mud flats. Most of the inlet cross-section is shallow with depths that range from 0.3 to 0.9m at mean lower low water (MLLW). Several natural channels pass through the northern part of the bay and eventually converge at Isanotski Strait, a 4.8km long channel with an average width of 0.8km. The currents in the strait at peak conditions range from 4 to 7knt.

In many areas in the bay, sediment plumes generate false bathymetry in SDB results. Thus, it was hard to separate between true-bottom detection representing the bathymetry and water-column detection representing the sediment plume. The window of opportunity to find an appropriate image for SDB is only 3 months (March to May), and the presence of clouds and sun glint limits the number of available satellite images to one or two that can be used to calculate the bathymetry. As a proof of concept, two different band combinations were used to infer the location of the channels in Bechevin Bay, AK (the northern part of False Pass) using WorldView-2 (WV-2) imagery (Figure 2): once using derived bathymetry (blue/green band ratio), and once using a turbidity map (red/green band ratio).

Based on the optical properties of the water, it is possible to use the red band instead of the blue band and restrict the light penetration to only the top layer of the water. As expected, the derived bathymetry was limited to very shallow depths because of the sediment plumes that made the water turbid. However, it is possible to use the turbidity map to locate the channels within the bay based on the currents generated by Isanotski Strait. Assuming that most of the surface turbidity will be concentrated in the strongest currents, mapping the water surface layer (shallow water-depth penetration) will provide the horizontal location of the channel. Based on the preliminary results using WV-2 imagery, Landsat 8 imagery was used because of its large coverage (185km swath width) and its repeatability (every 16 days).

As part of the annual channel inspection of Bechevin Bay, AK, the USCG Cutter SPAR conducted a single-beam hydrographic survey in May 2014. SPAR surveyed the charted channel and the surrounding areas to best mark the navigable channel. The USCG results were very similar to the SDB measurement inside the bay, including the identification of a shifting bar that rose to 3.6m at MLLW at the centre of the bay and east to the current channel (Figure 3). The USCG has observed this shoal (‘South Bar’) moving annually and recommends repositioning the buoys marking this shoal every one to three years. An additional shoal was identified at the entrance to the bay (‘North Bar’). The additional shoal was not detected by the SDB approach, possibly because of weak currents surrounding the shoal.

The formal incorporation of turbidity maps from satellite imagery into NOAA’s workflows is still to be determined. NOAA’s Hydrographic Survey Division (HSD), the group tasked with identifying and addressing the survey priorities throughout the United States, has already found SDB to be useful both as a reconnaissance and as a planning tool to assist with determining the accuracy of existing chart data and to assess the anticipated level-of-effort associated with a given project. In addition to the survey conducted by the USCG, HSD contracted Terrasond Limited to conduct a full bathymetric survey of Bechevin Bay and False Pass, AK. The position of a main channel and secondary channel through Bechevin Bay inferred from the turbidity map was validated by these surveys. The possibility for a secondary channel provides an alternative route characterised with fewer turns (thus being easier to navigate), and potentially being more geologically stable than the presently demarcated channel that is known to shift annually. The turbidity map result (Figure 3) was passed on to the field party to improve their surveying efficiency by focusing their efforts on the potential navigable channels, while simultaneously avoiding areas where they may risk grounding their vessel. Initial reconnaissance survey lines were planned based on the charted 4-metre contour limits and the inferred position of the channels. Ultimately, an alternative channel was identified; however, the depths were not as deep as those within the presently demarcated channel (Figure 4). That said, this alternate channel exists and can provide a navigation route for vessels with a shallower draft. This alternate channel would not have been mapped by the field party if the SDB turbidity map was not available.

The reconnaissance lines validated the channels suggested in the SDB turbidity map. The field party was able to strategically plan out the remainder of the survey with an emphasis on all the potentially deep channels, while carefully approaching shoal locations and avoiding non-navigationally significant waters. Executing the survey in this way is both more efficient and safer than the traditional methods for searching navigable waters using a single-beam sonar or half-stepping with a multibeam sonar.

The authors would like to thank Terrasond Limited for the ground truth survey data and permission to use Figure 4 in this paper and USCG’s SPAR survey team for their feedback.