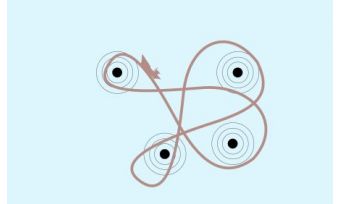 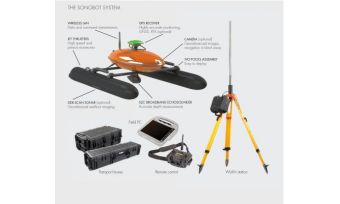 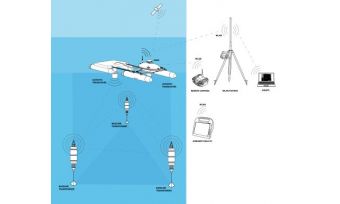 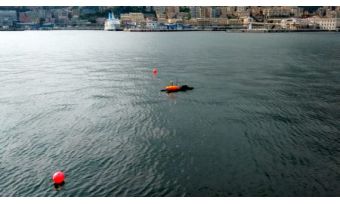 The market of unmanned surface vehicles (USVs) is expanding, with more and more remotely controlled and autonomous USVs becoming available as commercial products. While environmental monitoring and data collection remain the primary target for lightweight USVs, EvoLogics recently tried out a rather untypical, but very promising approach for using its Sonobot: the vehicle turned out to be well suited for calibration and testing of long-baseline (LBL) positioning systems, opening a wide range of new applications.

A typical LBL underwater acoustic positioning system uses an array of at least three seafloor-mounted transponders that form the system’s baseline. Before putting the system into operation, these baseline nodes are carefully located in absolute coordinates. When the system is operational, baseline transponders respond to acoustic interrogation signals from the target transceiver, which then calculates distances between itself and each transponder of the baseline array to derive its position.

LBL positioning systems offer great accuracy, independent of depth, but require the extra steps of deploying the baseline around the work site and performing system calibration to establish absolute coordinates of the baseline nodes. The calibration procedure involves sailing a vessel with an acoustic transceiver and a DGPS receiver over the deployed baseline array to test acoustic connection to baseline transponders and establish their positions on the seabed - which can turn out to be too time-consuming and costly for some applications (see Figure 1).

As EvoLogics from Berlin, Germany, was preparing for demo-sessions of its LBL positioning system at MTS/IEEE OCEANS’15 Conference and Exhibition in Genoa, Italy, the company’s experts discussed the usual challenge faced at an industry event: the equipment had to be deployed and set up as quickly and efficiently as possible. System deployment, calibration, testing and demonstration - all had to be performed within two hours. This is when the idea was born to use the company’s Sonobot USV, primarily intended for bathymetric service providers, to perform some of the tasks involved in LBL system demonstration.

The site at the Genoa harbour was well-sized to try out the new system configuration, and existing components of the EvoLogics LBL system and the Sonobot vehicle required only minor modifications, so the team decided to go through with the idea.

The main concept of using a USV as aid for an LBL acoustic positioning system is to streamline, simplify and automate the logistics involved with calibration and testing the system before putting it into operation.

Deployment of baseline nodes does require a vessel to transport them to the work site and sink the transponders around the perimeter. After deployment, the vessel is needed again, as system calibration requires another trip around the perimeter, this time circling around and across the work site to establish acoustic communication with baseline transponders and locate them in absolute coordinates.

For calibration of an LBL system, the vessel must be equipped with a highly-accurate DGPS receiver to ensure most accurate calibration results and, hence, the LBL system’s future performance. An acoustic transceiver, compatible with deployed baseline array, must be installed on the vessel to establish acoustic communication to the baseline nodes and calculate the distances between these and the transceiver. The DGPS system and an acoustic transceiver on board the vessel must be interfaced with a PC running positioning software that performs data fusion and calculates geographic positions of the baseline nodes.

Basically any vessel of appropriate size is suitable for deployment of the baseline array. However, in many cases, the vessel used for deployment is not outfitted with the equipment necessary for calibration of the system.

EvoLogics engineers came to the idea, that testing and calibration of the baseline array is exactly where an USV can ‘step in’, taking over most of the tasks from the vessel, which would no longer require additional equipment installations and all the extra manoeuvring involved in LBL calibration.

USV for Calibration of LBL Systems

The Sonobot, a stable twin-hull catamaran craft, already met most technical requirements to perform calibration of an LBL system: the vehicle was initially developed as a lightweight solution for hydrographic surveys. It is designed to deliver geo-referenced bathymetric data, as well as provide a real-time wireless connection to the station onshore for data acquisition on-the-go as depicted in Figure 2. The Sonobot is equipped with a DGPS receiver and can operate either over remote control or autopilot, following a survey grid programmed with the vehicle’s control software.

The team decided to undertake as few modifications as possible to incorporate the USV into the LBL system: they added an acoustic transceiver to be towed behind the Sonobot, and over its WLAN, configured the wireless connection between the transceiver and a PC running positioning software (SiNAPS), see Figure 3.

We used a small inflatable boat to deploy four baseline nodes and returned to the shore to initialise the software and launch the Sonobot. The vehicle was steered towards the ’work site’ and made a run to each transponder performing a quick acoustic communication test. For subsequent calibration, the USV, again on remote control, travelled along a path around and between the deployed transponders while the team observed the progress onscreen, as data was transferred from the USV over WLAN. Figure 4 shows this setting.

After calibration, the team demonstrated the LBL system’s performance using the USV as a mobile target, again manually steering the vehicle within the area: for visual comparison, the software displayed position fixes, estimated by the LBL system, along with data from the DGPS receiver.

During the session, conditions were very favourable (1-2Bft) with calm waters and an occasional light breeze. Maximum limits of wave and wind conditions for USV-aided LBL calibration would require further investigation.

Using a USV within the infrastructure of a LBL positioning system proved to be a very promising application of the vehicle. During the demo-sessions in Genoa, the team was able to save time and cost, only using a large vessel to deploy the system and retrieve the transponders after the mission. The USV could perform calibration and testing of LBL systems, deployed at larger work sites in open water, as it can be launched from the support vessel and operate for over 10 hours on one battery charge.

Looking at potential commercial applications, we plan to work on better integration of the hardware to incorporate an underwater acoustic modem into the Sonobot and perform further testing on automating LBL calibration by using the Sonobot’s autopilot. Software integration would potentially allow planning the route and executing a Sonobot mission within the LBL positioning software environment. 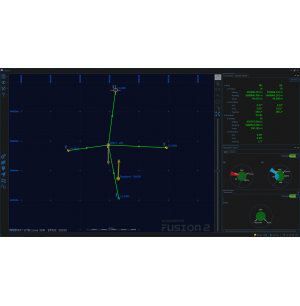